As I need to clear the complete garage by monday, having the cobra on wheels and rolling was necessary. Although this is a (self imposed) deadline, when the thing was on wheels and actually rolling it did feel more a milestone than I had thought. 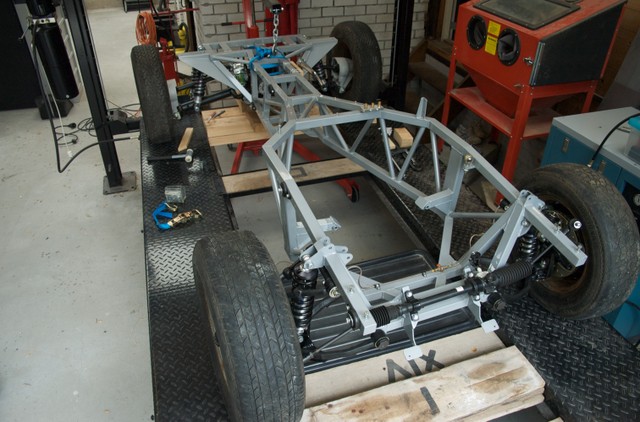 Again, I have to applaud Gardner Douglas for their 'fit'. The differential and the chassis get together by 8 bolts, 6 of which drop in pretty easily and the rear two need a little flexing of the diff cage; exactly as outlined in the build video.

Today I rolled the chassis to the garage of a nearby friend. It will stay there for the next week while work is being done in the garage. My girlfriend did take some pictures of the cobra's maiden voyage. Alas, there was no card in the camera, so no pictures of that. (Not that it was that spectacular anyways.)

The trip, however small, was useful though. You get all sorts of information you do not get by keeping the chassis static. Here's what I learned in 300 meters rolling the car from one garage to the next:

So, not much to do for the next week but nag with my suppliers for delivery of the gearbox, which seems to be the bottleneck in the delivery. The gearbox fit also determines the precise length of the propshaft (so I've been told), so partial delivery also doesn't make sense either. Patience…