With all the bearing cups in place in the rear hubs, the only thing which prevents me from completing the rebuild of the rear hubs, is to determine how many shims are needed inside the fulcrum. My info says the goal is to have a negative end float of 2 thou, which is kind of unusual. (Negative meaning you actually preload the bearings by assembling the hubs?)

The steps to get to this are not that hard. Basically what you do is build up the hub around the fulcrum shaft mounted in a vice. In the picture you see the black space tube over which the hub slides down. In the jaguar parts catalog this tube used to be two smaller tubes with the shims between the two tubes. Now, the shims can be placed on either side of the tube.

To determine how many I need, hopefully an even number so I can put the same on either side of the tube, I put a known amount of shimming (on top of the tube in the picture), making sure it is going to lead to a positive endfloat. I just used the original shims plus a couple. 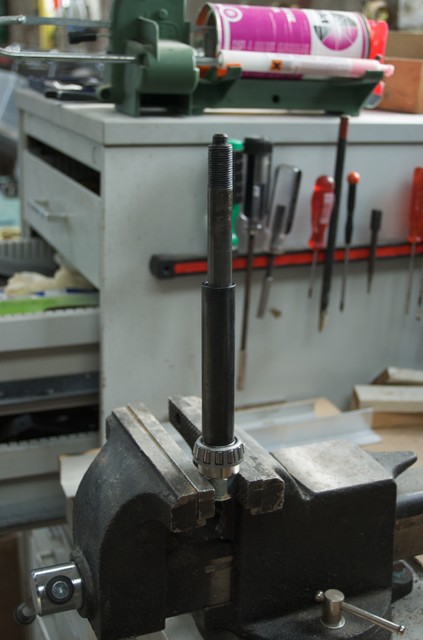 Placing everything on the shaft and filling the end up with some spacers and fastening gives a hub with a measurable endfloat which will be positive. Because I knew how many shims I had put in and I know what it should be, I can calculate what the actual number of shims needs to be. 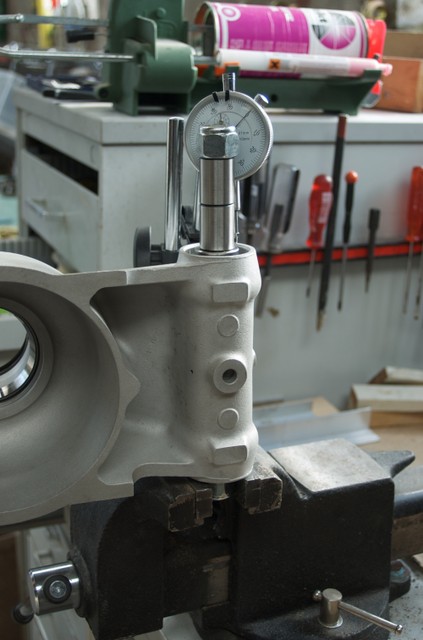 I'm not sure how accurate this all should be as most of the fellow cobra builders tend to send their hubs to Ward Engineering or equivalent. In the final buildup you'll need to grease the hell out of the whole fulcrum. I'm also going to use a modern style seal instead of the old 3 piece one. The felt piece in the classic seal feels a bit dated, although jaguar fellows keep telling me it works fine.

You've probably noticed I have carefully avoided mentioning the actual measured endfloat and the amount of shims in the above text. This is because I lost the post-it on which I had written those numbers down, and I don't trust my memory so I have to do the whole thing again. Oh well…