Donor parts back, one thing left: painting them.

Got the donor parts back from Galvin, as you can see below, they look like new! 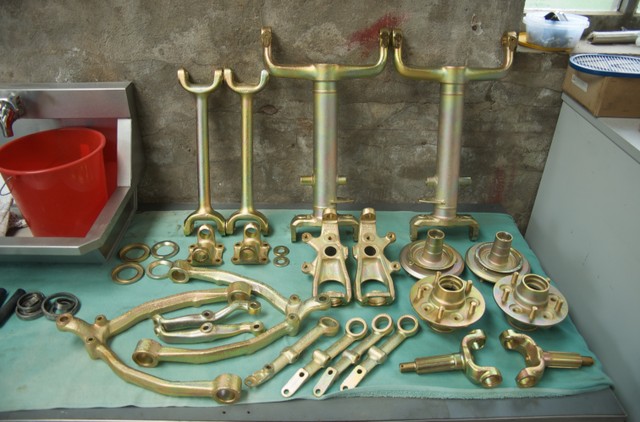 Had a chat with the guy on painting the parts with chassis coat. Particularly on the surface preparation, "Do I use metal ready or not?" His statement was that the paint would adhere fine to the passivation layer and that any acid-like fluid would ruin it, significantly reducing the corrosion resistance of the part.

Interestingly, asking exactly the same question to a POR15 employee (in the US, not in the NL) he stated roughly the opposite. Metal-ready won't hurt the passivation layer because it is in so short contact with it. His advice was to use the normal preparation procedure. That left me with nothing else than to try it out. Took two parts, prepared one by just degreasing it and brushed chassis coat black on it. I prepared the other part by dipping it in metal-ready for like 5-10 minutes or so.

I'm writing this on Monday, so the parts have been curing for a couple of days now. Everyday since I painted the parts, I did a little scratch test to see if there was a difference. There is not, as far as i can see. Both parts look the same and the chassis coat adheres well to both. It's not excellent though, chassis coat is clearly a top coat and not as much a protective coat as POR15, the real thing.

So, this leaves me with one preparation step: painting them. I'm planning to spray them all in one session, so the next days, I'll be probably busy masking them appropriately and building a spray booth somewhere in the workshop to spray them in.